July 29, 2020
dongsa.net (now koreanverb.app) was launched on June 28, 2009. Verb tracking was added on December 13, 2013. Since tracking was added visitors to the site have conjugated verbs over 7 million times.
When I first started learning Korean I was always confused about why verbs underwent some of the odd orthographic changes they do so I spent some time attempting to reverse engineer the changes that are made and came up with an algorithm to conjugate verbs. The benefit of this was that I could have the algorithm explain why certain changes were made.
Here is an example of the verb 걷다 which means to walk or to step which has a nominal form of 걸음:

If you are learning Korean I'm sure koreanverb.app will be a great resource.

Top 10 verbs over the past 10+ years of operation

I've been working on rewriting the application in Flutter recently so I can release an iOS version again. Believe it or not that will be the 5th language that the conjugation algorithm has been written in. The first commit was written in Erlang believe it or not but I abandoned that effort. I also worked on a PHP version which I abandoned. The site originally launched running a Python version of the conjugator and then to make it easier to run as an app I ported it to JavaScript. I later tried porting it to ClojureScript (which I abandoned). And now I've finished writing it in Flutter/Dart and all I have to finish is the UI (always the hardest part for me).

Popular posts from this blog 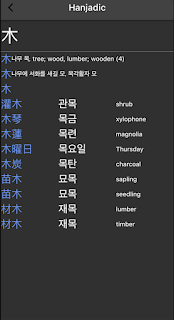 The Korean Hanja Vocabulary Tool iOS app is available now. You can grab it at https://apps.apple.com/us/app/korean-hanja-vocabulary-tool/id1602545538 . It uses the same database and logic for searching that you can find on koreanhanja.app I want to thank everyone who helped test the beta builds. Here are some screenshots:
Read more

December 19, 2021
Privacy Policy Last updated: December 19, 2021 This Privacy Policy describes Our policies and procedures on the collection, use and disclosure of Your information when You use the Service and tells You about Your privacy rights and how the law protects You. We use Your Personal data to provide and improve the Service. By using the Service, You agree to the collection and use of information in accordance with this Privacy Policy. This Privacy Policy has been created with the help of the  Privacy Policy Template . Interpretation and Definitions Interpretation The words of which the initial letter is capitalized have meanings defined under the following conditions. The following definitions shall have the same meaning regardless of whether they appear in singular or in plural. Definitions For the purposes of this Privacy Policy: Account  means a unique account created for You to access our Service or parts of our Service. Affiliate  means an entity that controls, is controlled by or is
Read more 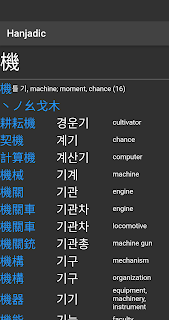 The Korean Hanja Vocabulary Tool Android app is now available. It uses the same database and logic for searching that you can find on koreanhanja.app I want to thank everyone who helped test the beta builds. Here are some screenshots: You can get it on Google Play here:  https://play.google.com/store/apps/details?id=net.bravender.hanjadicapp
Read more